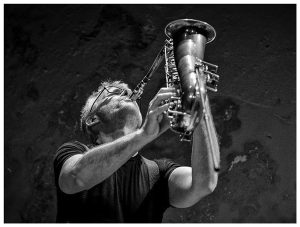 Philippe Lemoine is a French tenor saxophone player, based in Berlin (Germany) and Marseille (France). He is active in Contemporary Jazz and Improvised Music since the early 90’s. Lemoine explores the expressive capacities of his saxophone, developing a distinctive personal language, with a wide vocabulary of dynamics, pitches, densities and speeds, always pushing the acoustic limits of his instrument. As a soloist he uses all the aspects of his strong personality, in an expressive, generous and challenging narrative. Lemoine was the leader of septet ‘Kassalit,’ which was awarded ‘best band’ and ‘best composition’ at La Défense Jazz Contest in 1997. From 2002 to 2005 he performed and toured internationally with the Orchestre National de Jazz under the direction of Claude Barthelemy. In the underground art scene in Europe, Lemoine has also been involved with numerous other collectives in his home country, such as the Circum Grand Orchestra, in Lille or “à plusieurs” in Argenteuil, and lead his own quartet “Le Talent de La Colère” for which he also composed the music. www.philippelemoine.fr

< back to artists’ pages