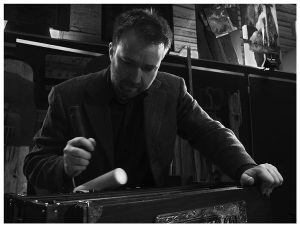 Kriton Beyer is a Greek-German musician and composer who works – as a performer and improviser – mainly with the harmonium and the daxophone.

He studied musicology at the Aristotle University of Thessaloniki in Greece. From 1990 – 2004 he played with a variety of local music groups in Greece, such as Sakis Papadimitriou’s troupe “omada epi topou” (the “ad-hoc ensemble”) and the post-rock group “Sigmatropic”. In 2004 he moved to Berlin, where he got heavily involved in the improvised music scene of the city.

In his work with the harmonium, Kriton Beyer uses both the natural sound of his instrument and “traditional” playing techniques as well as preparations, objects and extended techniques. His daxophone play is characterized by a very personal musical and sonic aesthetic, deviating from that of the instrument’s inventor Hans Reichel, who often had a tonal approach to the instrument. Kriton Beyer chooses to work sometimes with a stripped, minimal and strictly acoustic sound of the instrument, while at other times – in contrast to that – he also works with setups ranging from subtle to sometimes extensive use of effects and electronics.

As an improvising musician, he has performed throughout Europe. His compositions are largely based on conceptual art. Kriton Beyer has also conceived and commissioned the music software CinePrompt, which was specially developed for the use for live musical performance and live recording to films.
www.kritonbeyer.com

Kriton Beyer appears on all of the recordings of the Procrustean Bed’s Concert Series Recordings.

< back to artists’ page